I'm still around. I've been reading your blogs and keeping up-to-date with you! Let's get to the updates!

December was great. Finished all my Christmas shopping on time, I think everyone really enjoyed their gifts this year too. I was underbudget with the Christmas shopping too! We had so many Christmases to attend this year, but it's always nice to see family. One of my good friends had her baby just before Christmas and I recently was able to complete and send off a baby quilt, and matching taggie I made. 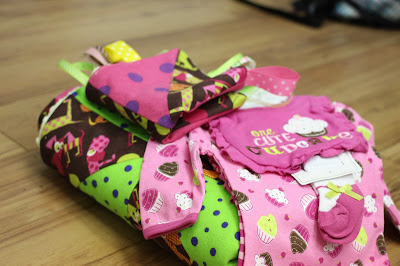 New years was spent watching The Trews with some friends in the city. Such a great Canadian band.

I received my passing mark for my latest ASL class in January. I've decided to forego the weekend ASL trip I have done for the past two years, but will likely sign up for it next winter. Instead I signed up for a photography class for the end of February. It was originally $229, on for $39 with a living social deal. It looks pretty good, and I'll get to learn some new tricks for using my camera on manual.

Yesterday I had my trial date for the accident I was in last June. I was incredibly nervous, and D came for moral support. We showed up early and were filed into the courtroom with about 20 other people. Signed in, and I was called up third. My friend (whose car I crashed into) did not show up (she didn't even receive the subpoena) so the case was dismissed entirely! Wooooohooooo!!! That saved me $490 in fine, 6 demerit points, and A LOT of insurance money! That friend is getting a good birthday gift this year!

For Christmas my parents got me a blender (I asked for it), so I've been making blended drinks a lot lately. So good! I love trying different variations, even adding spinach to some. I also have been making it out to the gym fairly regularly since the beginning of January. I got two months for $60 on a wagjag online. I am actually enjoying going to the gym now.

We had THREE snow days and a PA day last week. I was supposed to work this morning too but it ended up being another snow day. I found out once I got to the school since the job was never cancelled (supposed to cancel it before 7:30am) and no one was answering the phone at the school. Frustrating!

I've been doing respite work 2-3 days each week. The kids are pretty good, they get in silly sibling arguments sometimes but they are nice kids. Last night, the oldest kid (a 12 year old boy) taught me how to KNIT! He knows all about it, the terms for the stitches and needles. This is a kid that can hardly focus on anything other than videogames for more than 5 minutes, and he was knitting! I was very impressed, kids are always full of surprises!
Posted by Girl Makes Cents at 9:43 AM