Sunday I went to a bridal shower in Toronto. It was a lot of fun, the bridesmaids sang a song and played some games. Had a nice meal and I got to catch up with some friends I don't get to see often enough.

After the shower the bridesmaids were all travelling to pick up our dresses. We were all following the bride since we didn't know where we were going. The bride raced through a yellow light and the truck in front of me stopped at the red. I pushed the brakes to slow at the red and just plowed right into the truck.

My airbag went off, my car filled with smoke and I quickly turned off into the first empty parking space. The truck driver was my roommate from university. She pulls over and runs over to see how I am. I had hurt my arm but nothing serious. She was completely fine. She said she barely moved, THANK GOODNESS she was okay. I will try to upload a picture of my car because it was smashed right in. Her truck in perfect condition. She had an "illegal hitch" which saved the bumper from getting any damage. Thankfully. 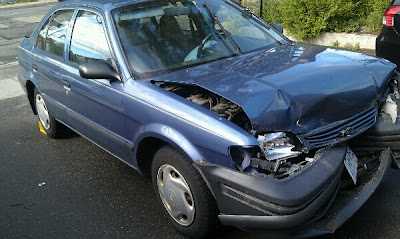 The bride calls us and finally I answer and she comes by with the two other bridesmaids that were her passengers. She calls for help and eventually the police and a tow truck come.

I had to sit in my car the entire time since my emergency brake and the parking break both were not working and I would roll toward the road everytime I let go of the brake pedal. The hooked it up, took our statements and issued me a ticket for careless driving.

It's 6 points and $490. However if when I request a court date to fight the ticket, which the police officer recommended doing, as did the tow truck driver and my insurance company, that if the truck driver does not show for the court date the charges will be dropped. She has told me that she won't show, it's a 3 hour drive for her and she does not want to see me have to face the charges.

My car is now at an impound. I am going to miss that thing :( I have a rental covered my insurance for now. Ugh, I needed a new car but wanted to have time to shop around. This is no fun.

Through this whole ordeal though I learned that I have the best friends and family. They are so patient and forgiving. So nice and willing to help, give me a place to stay and offer a car to drive.
Posted by Girl Makes Cents at 11:31 AM