I love to bake! But I do not enjoy the cleanup afterward. So many bowls, sugar/flour over the counters. The end result is totally worth it though.
My mom's friend gave me a sugar cookie package when she moved. I decided yesterday that I would make some! I also bought these new wedding cookie cutters so what better time to make them then for my roommate's bridal shower. If they didn't turn out, I could eat them myself.
I bought a rolling pin yesterday since we didn't have one then went to work. Made the sugar cookies and then went to decorating. This was very annoying because I didn't have the right tip for the frosting I made. So I had to go back to the store to buy an icing tube with the tip I wanted. I piped the edges and then flooded the middle with white or pink icing.
After that set...or at least close to set ;) I started decorating. This is my favourite part. I only had 5 different shapes so a lot of my decorating was the same. It made me feel like a kid again. Kinda looks like a kid made them too, but I don't really care it was fun to do. 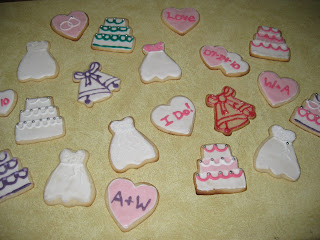 What was the cost of this activity? Well the package was free :) I'm sure it would be cheaper to do it from scratch if you didn't have a free package. I bought the rolling pin for $11.99 from CTC, the cookie cutters for $4.99 at Bulk Barn, icing tube was $3.99 for 4 at Metro, icing sugar we had, food colouring we had, decorations I picked up at Bulk Barn as well and they probably totalled $2 and I have a bunch left over :) I'll be able to do the same thing again for much cheaper now that I have the materials needed. 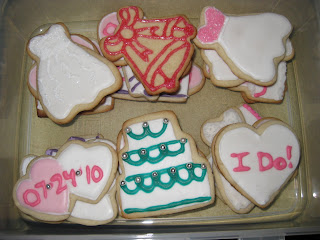 Yesterday I also bought that kitchenaid stand mixer. It was $180 and came with a pouring shield. I took it out of the package and turned it on and it sounds/looks good. I didn't make anything with it, but I look forward to using it. I don't think I will take it out of the package again until this summer when I move in with BF. It was a refurbished model and it did have a couple of black scratches on the base but still worth it to be $300 cheaper than buying it new. I think I will invest in the coated accessories just so I can put them in the dishwasher (I think they look nicer too). I look forward to making some bread and desserts with it :)
Posted by Girl Makes Cents at 2:32 PM