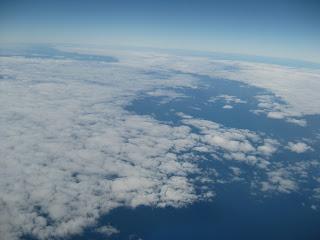 December 29th we left for Dominican from Toronto. We left at 6:15 am. This is what our view looked like for the majority of the 4 hour flight.

I was actually sick the first day. I felt freezing in my jeans, two sweaters, a coat in tropical weather. I slept the first day. The next day D ended up getting sick. He visited a doctor and ended up having to get an IV and a ton of prescriptions. Glad I got that last minute medical insurance! 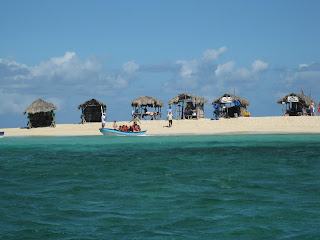 When we became healthy again one of the first day trips we did was to Paradise Island. It was a 2.5 hour bus ride through the country side and then another 10 minute bus ride to a sand bar. There we went snorkelling. It was my first time snorkelling and I loved it! We saw a ton of fish and it was a beautiful day. 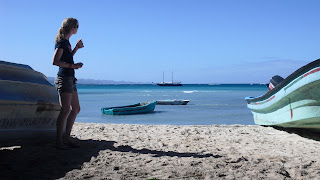 After snorkelling we hung around on the island. This is me after snorkelling, don't mind the hair! But the water was beautiful and there was a neat pirate ship in the water. 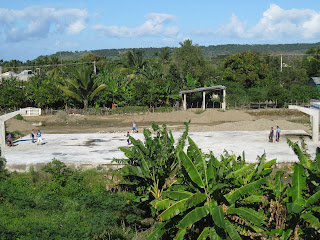 On our way back we stopped at a restaurant and here we saw some kids playing baseball. I loved this. There were kids everywhere and they just played. Electricity is not very common and it turns off a lot so electronics were not very popular. We just don't see enough of this anymore here. 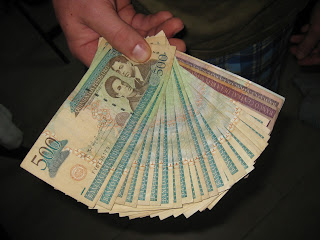 I liked snorkelling so much that I decided to become SCUBA certified. D is already certified so I thought it would be a good idea to become certified as well instead of just diving. It took 3 half-days of training, one day in the pool and 4 ocean dives and then a written test to become certified through PADI. I absolutely love it though and think I may be hooked so it was a good investment. This is a picture of D holding what it cost me in Dominican Pesos (12,375)to become certified. Equivilant to about $350 CAD. 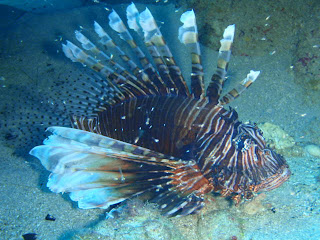 SCUBA pictures!! This is a lionfish. It's apparently extremely venomous. I was not aware of this until AFTER my fifth dive in the ocean. I saw many of these and came quite close. EEEEK! 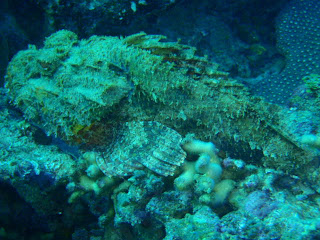 Can you see the fish here? There were so many cool camoflauge fish! We also saw an eel, and an octopus. The octopus even inked!! 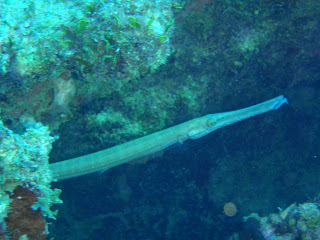 Not sure what this is. But I'm assuming it's something pretty cool because my instructor would point at it everytime we saw one. As did another man we dived with when I was done my course. It looks pretty cool, anyone know what it is? 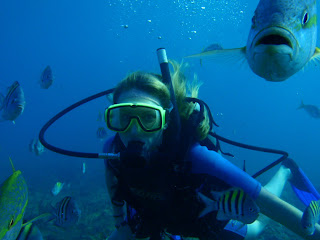 Hehe, this is me SCUBA diving. I thought this picture was funny because of the fish on the right, it's like he is posing for the picture! I actually got BIT by one of those fish on my thumb when I was feeding the fish bread and a banana. Ouch! 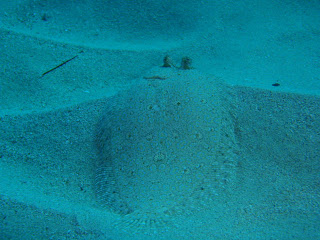 Even harder to see this one. I think he is cute though with his eyes and it looks like a smile! Awesome SCUBA diving, I definitely recommend it. Did you know SCUBA stands for self-contained underwater breathing aparatus? We did all our dives in Sosua.

On the day I was supposed to do my certification test we slept in late and had to skip breakfast. However D had bought a coconut on the beach the previous day so we took it with us and had coconut  for breakfast on the ride to our divesite. Other passengers thought it was pretty neat. 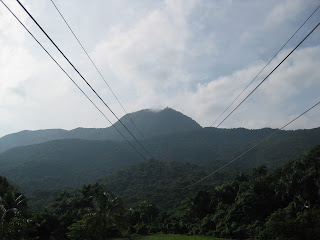 Another trip we did was go up Mount Isabel. We took a taxi that came with a tour guide and toured the city. Our first stop was the mountain. This is where Jurassic Park was filmed!! We took a cable car up the mountain and then walked around. The tour guide pointed out flowers, caves, fruit trees and more. It was really cool! 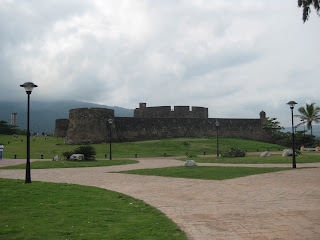 We also went to see a fort. Here we saw a crab, a donkey, and men making kites. 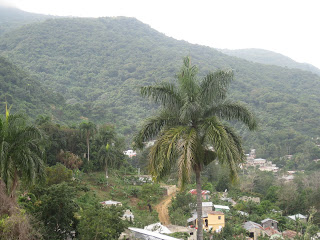 A picture of the city, the mountain and a palm tree. I'm slightly in love with palm trees. 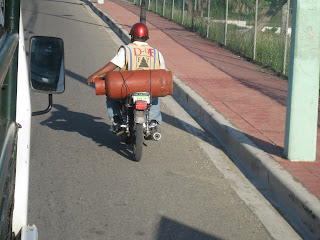 There were way more motorcycles than cars on the roads in Dominican. Almost no one wore a helmet. We actually saw one tiny motorcycle with two adults and two kids. I thought this guy was pretty funny carrying a propane tank. At least he is wearing a helmet! 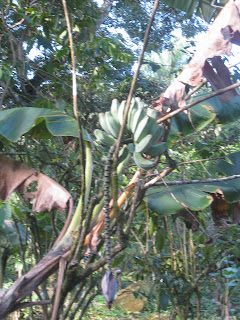 Our final tour was to see and jump down some waterfalls. Before the waterfalls though they took us to a plantation. Here we saw tons of fruit: mangos, oranges, cocao, bananas, coffee, pineapples, and more. Here are some bananas. 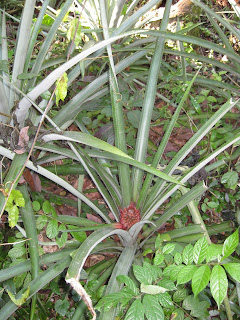 Did you know pineapples grow in bushes not on trees? We did not until we saw this. It's almost like a cactus bush. Not quite ripe! 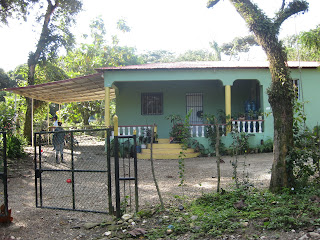 This is a typical house. Maybe nicer than most. I loved the colours! 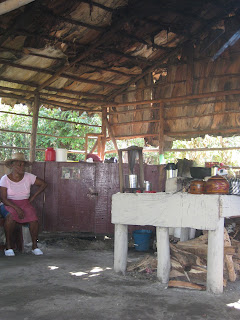 We made another stop on our last trip to see how coffee, cocao and cigars are made. This is Mama making coffee for us. It was really good! Us girls had to put on straw hats, and sing a song as we crushed the newly roasted coffee beans. Mmm smelled so good. 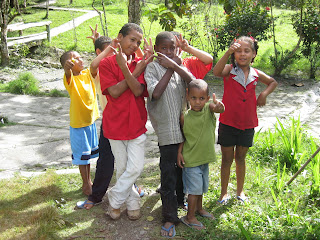 Along our way kids would be running after our bus. Many in barefeet on the gravel roads yelling for sweets. We would toss them some candy and they were so happy. Here I got a picture of a group that came to see us. Kids are funny. 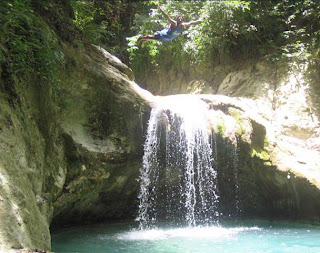 Finally we made it to the Damajagua Waterfalls. There are 27 in total but we only had time for 7. We hiked and then swam and then climbed up the waterfalls. Once we were at the top we slid or jumped down them. It was so much fun!! This is not my picture but here is one of the workers jumping off one of the waterfalls we did. 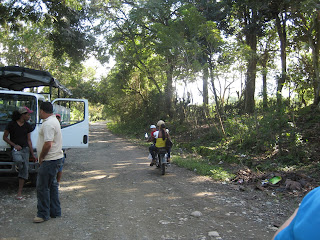 So crazy to see moms holding babies in their arms on motorcycles. I was just amazed everytime I saw this. 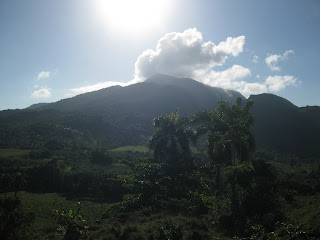 Overall it was an amazing trip. We also went kayaking, D took me on the catamaran, swam in the ocean, played ping pong, played dominoes, laid on the beach, took long walks on the beach, ate a ton of awesome food, and met some cool people. It was a fun time hanging out with D for two weeks in Dominican! 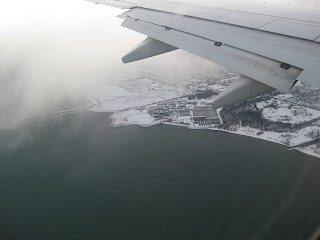 Now we are back to Canada. I took this picture on our flight back. We could not see land for most of the trip back due to it being so cloudy. When the pilot decended and snowy Toronto came into sight the whole plane booed. It was pretty funny. I would love to go again! So here we start the vacation fund again...
Posted by Girl Makes Cents at 7:01 AM